To share your memory on the wall of Linda McCarty, sign in using one of the following options:

Provide comfort for the family of Linda McCarty with a meaningful gesture of sympathy.

Learn the benefits of ordering with us

Provide comfort for the family by sending flowers

Show you care by sending Flowers

We encourage you to share your most beloved memories of Linda here, so that the family and other loved ones can always see it. You can upload cherished photographs, or share your favorite stories, and can even comment on those shared by others.

Christopher Kane, Ralph & Nancy Chicotel, and others have sent flowers to the family of Linda Alice McCarty (Delozier).
Show you care by sending flowers

I am so sorry to read in the newspaper about your Mom passing away! How sad for you to lose such a special person in your life! My deepest sympathies to you and your family! I will keep you all in my prayers!

Posted Sep 25, 2019 at 07:03pm
Linda helped me get started in my specialty at the health department. Her wisdom in the field of medicine and public health was invaluable. I could get her to laugh in some of the grimmest moments, and she said she thought I should be a comedian. She was the consummate professional, always striving to know more and to do her very best. Of the many types of work we collaborated on, I would recruit volunteers to work for the health dept., and she would choose who she wanted to work at a particular clinic, and line them up for a specific day and time. When we meet in Heaven to continue the work of Jesus, by her example, I will be ready.
Comment Share
Share via:
HS

Flowers were purchased for the family of Linda McCarty. Send Flowers

Posted Sep 24, 2019 at 02:00pm
Sorry to hear of the passing of Linda she was a very kind and loving person ,condolences to her family and God Bless.From the Bahr Family
Comment Share
Share via:
CK 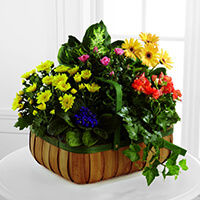